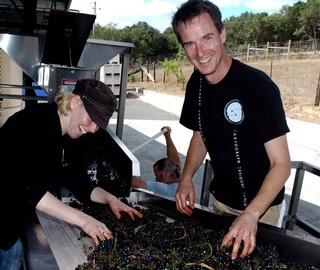 In 2005, Alan Baker quit his award-winning career in public radio, sold his home, loaded everything into a truck and moved from Minnesota to California. It was a well-developed passion for wine, the wine industry, its visionaries and that seemingly magical process of transforming grapes into great wine that led to this radical life change.

Upon arriving in Northern California, Alan immediately sought work in the wine industry. Taking positions at Unti Vineyards and Peterson Winery he immersed himself in all aspects of the trade, from vineyard and cellar work to sales and service. The idea was to learn as much as he could take in.

At the same time, Alan employed his radio production talents to create “Ratcasts From the Cellar Rat,” a National Public Radio sponsored podcast that gave an inside look at all aspects of the wine business. His podcasts, writings and interviews with members of the industry quickly developed a loyal following—a following that would eventually lead to the production of his first wine.

Alan’s next stop in his wine education took him to the start-up urban winery, Crushpad, in San Francisco where he engaged in sales, marketing and production for the groundbreaking venture that would launch his first commercial brand Cellar Rat Cellars. It was there that he met Serena Lourie, who shared an equal interest to his in creating a life around wine. While at Crushpad, Alan produced his first commercial wine, an experience that was supported by the listeners of his podcast and one that convinced him producing great wines was the calling he needed to answer.

In 2009 Alan, along with Serena, left Crushpad, moved to Healdsburg in the heart of the Sonoma County wine country and set about founding Cartograph. Today, Alan spends his days in the vineyards and in the cellar, overseeing that magical process of turning grapes into wine.

The winding path that brought Serena Lourie first to Crushpad in San Francisco then eventually to Healdsburg, California to launch Cartograph echoes the global trajectory of Cartograph’s wine label.

Having grown up in a bicultural household with one foot in France and the other in the United States, the cornerstone of the day was always the family meal. Friends and guests would pull up the chairs between the relatives and, with the first pour, the storytelling would commence.  Invariably, the evening would end with someone pulling out a dust-coated bottle from grandfather’s cellar with a toast “to family”. Such evenings made the distance not seem so far and was a practice that followed Serena across America and France.

In college Serena dedicated her studies and ultimately her career to caring for society’s most vulnerable as a registered nurse, specializing in child and adolescent mental health. Recognizing the inefficiencies in the healthcare system, Serena pursued her Master’s degree in healthcare administration and an MBA and developed innovative adolescent mental health programs adopted in hospitals and schools nationwide.

Eager to explore business practices of other industries, Serena joined a Japanese tech company in Silicon Valley and honed her skills in customer service, operations, and user experience. Thriving on the energy of startup culture but seeking to accelerate her learning, Serena joined the founding team at Lowercase Capital whose mantra echoed her own trajectory: “we enable startups, fuel the ambitions of their entrepreneurs, help them grow as people, and marvel at their audacity of their insistence upon changing the world.”

When not working, Serena explored California's wine regions. As her typical curiosity and determination took hold, she found herself not just sampling the wares, but meeting the growers and winemakers and learning the nuances of fruit and fermentation. The call was too strong to ignore. Wine tastings and classes only encouraged Serena to learn more about the process of wine-making and she soon headed to the groundbreaking urban winery, Crushpad. There she met Alan Baker who guided her first winemaking venture. In producing those barrels, their lives, their thoughts on wine, and their desires to make a life in the wine industry melded together.

By 2009, they founded Cartograph, with the winding arcs of its label mirroring the diverse locales and experiences that underpin the colorful and eclectic textures of Cartograph’s wines. Today, Alan’s primary focus is making the wine and Serena manages the daily operations and both look forward to sharing wine with you.