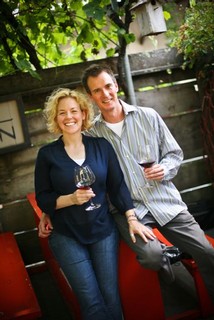 Cartograph was formed by Alan Baker and Serena Lourie after each had successful careers in other fields. It was a passion for wine that led them on the journey that launched Cartograph.

In 2008 Alan was employed at Crushpad and had been making Pinot noir under his Cellar Rat Cellars brand. On a hiatus from healthcare, Serena came to Crushpad to move beyond her love of wine consumption and explore the world of winemaking. Alan was responsible for coordinating her winemaking efforts with the team at Crushpad and they discovered working together over that first season making wine together that they shared a similar palate and both were very passionate about pursuing a life in wine. Alan already had a laser focus on Pinot noir and the two of them collaborated on three wines that Serena was making with friends. Though Alan and Serena initially bonded over the wine they were making together, they also formed a close personal bond.

Sitting on the curb one evening in the spring of 2009 after a long day in the winery at Crushpad, Alan and Serena hatched a plan to forge out on their own to launch a new brand. Shortly therafter they moved to Healdsburg to focus on Pinot noir from the Russian River Valley and Mendocino Ridge appellations. Two barrels, 50 cases, of Pinot noir accompanied them from Crushpad to Healdsburg which would become the inaugural release under the Cartigraph label. The logo on the front of each bottle is a visual encapsulation of the winding road that brought the two of them together and how they joined forces to launch Cartograph.

Serena's main focus is on the tasting room and building the business and Alan is focused on sourcing great fruit and making the wine. Building Cartograph into a self-sustaining business is still a work in progress but following a path of slow, organic growth. Cartograph now produces 1,300 cases of wine a year still focusing mainly on Pinto noir but also making aromatic whites in the style of the Alsace region of France, which were the wines that got Alan hooked on wine years ago. The goals for Cartograph are to make wines that impress with nuance and subtlety showing how elegant wines can be when made when grapes are sourced from a great vineyard and with a light touch in the winery.

Since moving to Healdsburg in 2009, Alan and Serena opened their first tasting room in 2011 in a shared space and then moved to 2013 to their own location one block north of the main plaza in downtown Healdsburg. In 2014 Cartograph was featured in a documentary entitled American Wine Story which aired at numerous film festivals and ia available online via vhx.tv and Itunes. Taking another step forward, in 2016 Cartograph purchased it's first vineyard.

The Five Points of Cartograph

A “Cartograph” is a visual marking of ideas, either over time or place. The cartograph on our labels is a visual depiction of the journey that brought us to winemaking and the ideas that have propelled that journey. 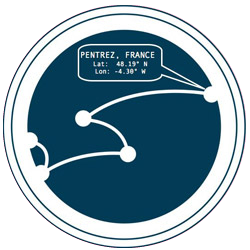 It was in Pentrez, France, located in the rustic Bretagne region of my family's homeland, where I developed an appreciation for wine. Every Sunday our extended family would gather for lunch. Lili would make bread, Jacques would bring fish fresh from the morning's catch, Mamie would harvest veggies from the garden, and Grand-père would emerge from the basement with a sandy bottle of wine. You had to smell and taste every part of the meal which began my incredible journey into wine.

Most of us can mark the time and place when where our fascination with wine first overcame us. Mine came while living in St. Paul. Floating in a small kayak on a lake in northern Wisconsin with a calm breeze rocking my little vessel, the sun was bouncing off the rolling water and I was surrounded by the North Woods. I opened a bottle of 1998 Alsace Riesling. Everything but the wine, with its cacophony of citrus blossom, pear, black tea and petrol aromas and flavors instantly disappeared. I was in the wine. How could a seemingly light and simple wine possess such an explosive combination of flavors and aromas that my remarkable surroundings simply faded into its shadow. It was that moment that somehow so engaged my senses and intellect that I embarked on a journey to learn all I could about wine, how it was made and how I might one day put such remarkable qualities in a bottle.

It was in Washington, DC where I had my first taste of California wine. Sitting at a restaurant on the harbor, surrounded by friends we opened a bottle of Shafer Cabernet. I was mesmerized by the complexity of the wine and how blackberry, currant, and dark cherry flavors intermingled with tobacco and leather. I was mesmerized and eager to learn more about California wines. Eventually, I made my way to California and one of the first wines I made was a Napa Cab.

We met in San Francisco, where both of us journeyed following the desire to engage our lives in the pursuit of winemaking. Alan moved there to make wine at Crushpad after producing his first wines in Dry Creek Valley. At Crushpad Alan made his first Pinot Noir to be sold under his Cellar Rat Cellars label. Serena too was drawn to this groundbreaking urban winery where she met Alan and he helped her produce her first wines. It was in this setting while working together, sharing wine while sitting on stoops and talking about our hopes and future, that our lives came together and our dreams for Cartograph took form.

It is here, in Healdsburg, where our journey currently places us, and where we pursue our desire to turn our own journey into wines that will inspire others to appreciate a time and place with wine. For us, there is no better place to pursue producing great Pinot Noir than Healdsburg in Sonoma County. For Alan it is a return to the location where he first made wine, while for Serena the small town and fertile backyard of our new home recalls her family home in France. Most important, Healdsburg is close to the great Pinot Noir growing regions of California’s North Coast where we can carefully apply hands-on efforts through every phase of the grapes’ maturation and ultimately turn them into the place-defining wines we both strive to produce.